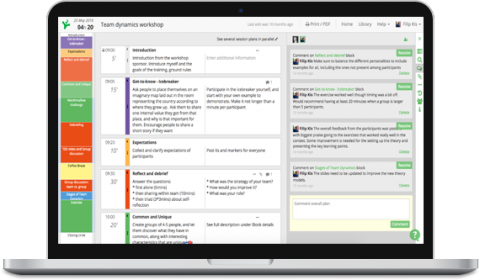 IAF and SessionLab partner up

When you sit down to think through how you will design a session, what do you need? You need a simple tool to help develop and contain your thoughts and also some inspiration about methods you might use. Thanks to the new partnership between IAF and SessionLab you have both in one place.

SessionLab is an online application, providing a dynamic way to design your workshop and draw on the collected experience of facilitators about what methods you can use. IAF and SessionLab (formerly TrainedOn) have been collaborating for more than a year to bring you all the methods from the former IAF Methods Database in a modern design tool, due to launch in the coming months.

Where did the idea for SessionLab come from?

When the co-founders of SessionLab Robert Cserti and Filip Kis were working in a youth NGO, they often facilitated workshops and delivered soft skills training sessions. Building their sessions on the experience of other facilitators, they found it was tedious work finding the right content and method, and learning from each other’s best practice. There was a clear need to have a tool that made knowledge management and sharing easier.

The vision of SessionLab is to build a tool that helps facilitators create better sessions and share knowledge so they can save time and have bigger impact. The co-founders started by building a tool that makes session planning easier. You put your knowledge into reusable blocks in the system, and these can be developed, shared and recycled. Now they’re focusing on knowledge-sharing and community-building. SessionLab will be a place where you can find inspiration for your next session - in a public library and in your own private repository.

A wide range of professionals are using SessionLab, including facilitators, service designers, innovation consultants, agile coaches, organisational development consultants, and soft skill trainers. Users come from various fields, but all are connected by their need to design interactive group sessions that must to be properly planned and facilitated. . How does SessionLab work?

Most people start using SessionLab when preparing the facilitation plan for an upcoming session. The application allows you to add and amend blocks in your session plan, drag and drop, immediately recalculating the timetable, making it easy to tailor the day to the respective client's needs. If you often work with other facilitators, then SessionLab gives you a consistent format and makes it simple to reuse blocks from your sessions. This also helps to create your shared knowledge base with your colleagues. Many organisations have a large amount of facilitation-related content such as facilitation methods and exercises, scattered over their intranet or website, scarcely used and often outdated. SessionLab provides a modern, user-friendly platform where content is really easy to find and work with. The online community provides a living, constantly evolving knowledge base. This being the recent focus in developing the application, SessionLab is very happy to partner with IAF in reviving the IAF Methods Library.

The IAF Methods Library and SessionLab

In 2004, IAF member Jon Jenkins set up an independent facilitation methods database, with initial content being supplied by Jon and Maureen Jenkins’ facilitation practice. The database was informally called the “IAF Methods Library” but soon attracted the formal support of the Board. When Jon Jenkins died in 2010 Maureen continued the work her husband had started. With the advance of technology, it became clear that we needed to find a new way to make methods available to facilitators worldwide, and Martin Farrell became the Methods Database Revival volunteer manager for IAF. In autumn 2015 Martin met Robert and it was immediately clear that there would be mutual benefit in working together. The partnership was agreed by the Board in November 2016 and the Methods are now being reviewed one by one to make sure they are up to standard. The new IAF Methods Library will be launched within the coming months. Jon Jenkins’ and Maureen’s legacy will live on in a modern, useable and attractive platform that will help facilitators to promote the power of facilitation worldwide.