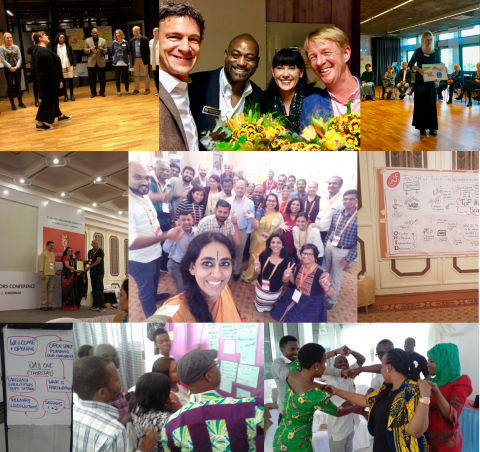 IAF around the world

This month, we have news from India, China, Africa, Sweden, Japan and Canada.

IAF India had its 4th annual conference in Chennai on 3-4 November. The conference had over 160 participants from across the country. The Regional Director also presented the FIA awards to Wockhardt Hospitals at the conference.

The Shenzen IAF group ran a two-day workshop with Pepe Numi with about 20 participants on 20-21 November.

The Africa Facilitation Conference 2017 was organised locally by Tamasha in Arusha, Tanzania. The conference took place on 23-25 November under the theme "50 Shades of Participation" with the objective to "Explore, Experience and Promote the Power of Participatory Facilitation". In total, 35 participants from 9 countries attended and took part in 10 concurrent sessions, as well as plenary and evening meetings. There were also sessions for IAF Tanzania, IAF Africa and an online session (Intro to Online Facilitation). We saw high levels of engagement, interaction and positive energy throughout the process. The next conference will take place in Mombasa, Kenya.

Rosanna von Sacken, IAF Regional Director for Canada writes: “I made a visit to Japan recently in November, and reached out to fellow facilitators. I was warmly received by seven other facilitators who were able to meet with me. Even as a non-facilitator, my husband was welcomed and included in the group’s gathering. Special thanks goes to David Nevin, who generously provided time and expertise as our personal tour guide of Tokyo for the day, before meeting with the other facilitators. He also made reservation arrangement and ordered the yummiest Japanese dishes to share. A fellow Canadian, we were impressed with his fluency in Japanese and knowledge of the local areas. We shared lively conversations and learned about each other’s work, and voilà! International connections and friendships were made. Everywhere I go, I try to connect with colleagues and friends. I encourage you to reach out too - you’d be surprised how many people you might meet and new friends you might make.”