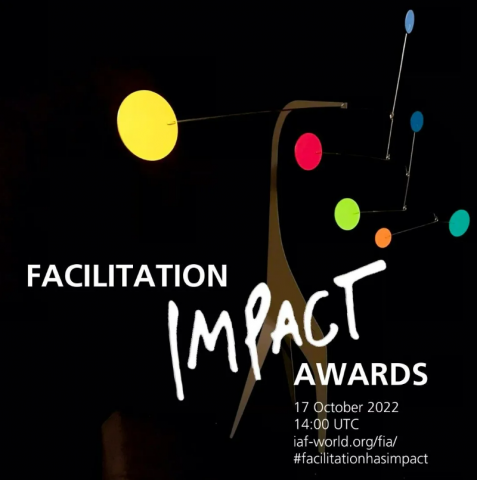 Eight organisations and 21 facilitators will be honoured at this year’s Facilitation Impact Awards ceremony on 17 October 2022.

Recognising our world’s need for a story that brings people together with good news, the 2022 awards called upon organisations to tell their stories of using facilitation to have a positive impact.

Leaders from 8 organisations spanning Canada, Denmark, India, the Netherlands, Russia and Turkey will be recognised for using facilitation to make change and progress happen for their organisations.

“Facilitation is being used around the world by leaders who understand the power of facilitation. The awards recognise the specific impacts have achieved from using facilitation.” – Julia Donohue, Chair of the IAF

“We all want to see positive change in the world we live but it’s not easy to achieve. Under pressure, group dynamics and processes can fall apart. These are make-or-break moments when an independent facilitator can make all the difference.” – Jeffer London, Award Ceremony Host.

“The awards flow from a peer evaluation of nominations by IAF members who award points based on objective criteria that can be applied to any project. The results for successful nominees are reflected in awards at the silver, gold and platinum levels. The awards are international recognition for the achievements of both organisations and facilitators.” – Julia Donohue, Chair of the IAF

“The remarkably diverse range of projects receiving awards demonstrates our belief that good group process facilitation can be used in any context to help people change the world around them and have an impact,” shared Ms Donohue.

“The facilitators who have gained recognition for their expertise have combined innovative planning with expert delivery in widely-varied fields to help their clients meet complex challenges and achieve organisational objectives,” Ms Donohue said.

This will be a feel-good celebration that promotes the power of facilitation by illustrating the positive impact that talented facilitators bring about. As you might have guessed, it will be very participatory. You can go to the event platform now to post your questions for the panel discussions we will be having with the awardees.

Hosted by Tamara Eberle, Shalaka Gundi, Rachel Song-Yeon Kim, Jeffer London & 20 panel moderators who will bring you into conversation with our awardees about how #facilitationhasimpact

It is a unique opportunity to connect with hundreds of facilitative leaders in a convivial manner – and of course, hear about eight awardee projects.

Organised by the International Association of Facilitators (IAF), this award ceremony is the most prestigious in our field, inspiring people the world over to use facilitation to achieve a measurable and positive impact

You can join the ceremony event platform now at iaf-world.org/fia

Four of the awardees are large corporates, two are small to medium-sized businesses and two are not-for-profit organisations. The diversity of projects emphasises that expert facilitation can play a major role in any type of project in any sector. The projects undertaken clearly show that good group process facilitation translates into cost-effective and creative outcomes.

Facilitation impact stories for each awardee are at iaf-world.org/FIA

Some of the awardees will also be featured in a portfolio of one-minute films published on the IAF YouTube channel, where you can also find last year’s awardees and influencers in the market.

The International Association of Facilitators (IAF) was formed in 1994 and has a rich history of participatory development. From our past have emerged some of the foundational tools of the facilitation profession, including the IAF Statement of Values and Code of Ethics and the IAF Core Facilitation Competencies. Today, the Association is growing worldwide, fuelled in large part by the growth and activities taking place at a global, regional and local chapter level.