How does reflection on bias lead to a more inclusive practice? 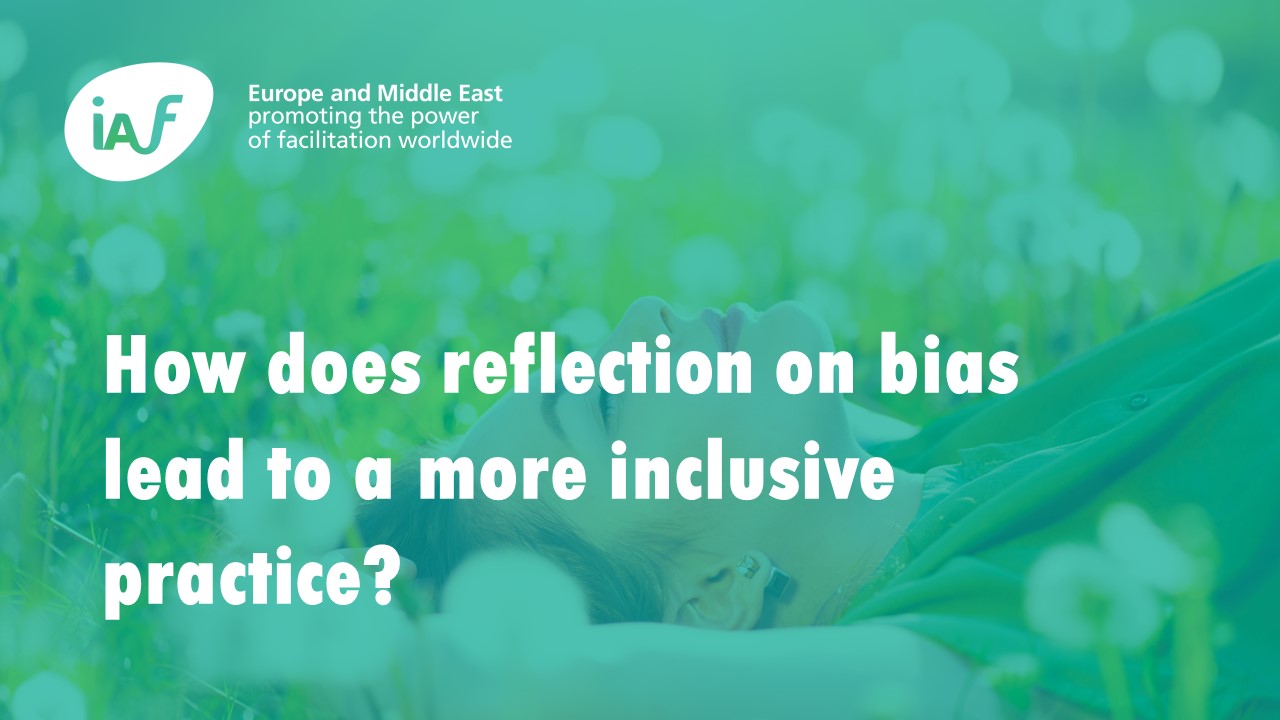 For this issue of the Global Flipchart, Rachel Malek, Zena-Gabrielle Hailu and Anja Ebers, inspired by an insight from Anja Ebers, brainstormed around the following question: “How does self-reflecting on our own conscious / unconscious biases lead to more inclusive facilitation practices?” The brainstorming turned into the following asynchronous virtual conversation….

Growing up in an English-speaking Canadian family, I was raised with a biased idea of what a “good” conversation and group dynamic looked like. Everyone gave vocal input on a topic, but nobody raised their voice, interrupted, spoke emotionally or used strong language. Meetings were focussed on making decisions, often by a majority vote, that would be wrapped up before the meeting closed. There was never too much noise and never too much silence. Over the years I learned that this form of conversation was not universal. I witnessed that in some cultures, interrupting and having loud emotional exchanges was a way of demonstrating interest and passion in the conversation, whereas in other cultures moments of silence were the preferred way to demonstrate respect and listening. Similarly, not all groups sought to make decisions by majority, in fact some didn’t even see the meeting as the place to make decisions - it was a place to prepare and explore possible decisions that would be made at another time. When I moved to Italy, I observed how groups talked and interacted, and the immense differences in the tools of dialogue that I needed to use. I saw vivid cultural differences from my Canadian upbringing, particularly regarding what a "good" conversation looks, sounds, and feels like. Yet in spite of cultural generalities, I realized that many individuals still feel unheard in a group of people talking quickly and interrupting one another. It seems to me that, keeping in mind our own biases and cultural habits, the only way to work inclusively is to constantly observe ourselves, observe our groups, and be flexible with a variety of methods and the ability to change strategies even during a meeting. This to me is the core of responsible, reflexive facilitation - being able to be wrong, and more importantly, being able to be uncertain and accept this complexity every moment.

I want to pick up on Rachel’s words with a story from my own experience. Despite my multicultural heritage, the relativity of the meaning of words was not always clear to me when I first began facilitating. I often assumed that the language I chose for a process with a diverse group of participants reflected all participants’ reality constructs. When I started working in the German context, English was the language that was used in most of the events I facilitated. I often noticed puzzled looks on my German native-language participants’ faces after I had explained an activity. These looks would be followed by a lot of questions asking me for more details. I would happily provide the details, yet in the back of my mind I was annoyed and asked myself why they didn’t just go ahead and try things out. I interpreted the questions as reflecting risk aversion, and drew a wider conclusion about “Germans” and their inability to go with the flow. A few years later, when I’d learned the language well enough to conduct events in German, I realized that a literal English-German translation of my instructions was terribly inadequate in German. It was the equivalent of speaking a sentence and leaving out a third of the sentence’s words, so that the full meaning of the sentence was not clear. It was at this point that I retrospectively realized how my bias had affected my interpretation of my German participants’ questions, and how poor my instructions had been in the past when reframed through this new perspective. It was a very humbling experience. I can only reiterate Rachel’s words on the importance of self-reflection. Questioning our own assumptions as facilitators as we design, run and reflect on our events will lead to more inclusive processes and events. And remember not to forget that self-deprecating humor, it’s a must for humble reframings!

With my work I intend to let people experience that group processes can be energizing, effective and surprising - I want to inspire them to open up to other ways of relating to one another - and ideally try out some of these ways on their own. The cornerstone of my work are Liberating Structures - which revolve around many principles, such as to include & unleash everyone. I regularly see LS delivering on that end, that’s why they are my go-to framework. This has caused some not-so-productive conflict with other seasoned facilitators, for example due to the lack of check-in rounds in larger circles: “Why don’t you create a moment at the beginning of the meeting that lets every voice get heard?” is one criticism I regularly hear. Silently for myself I think: “Is it really letting everyone get heard? Forcing introverts/ shy people to say something to the whole circle? To make an impatient extrovert suffer through it, to give her/him endless time to polish her/his turn while *not* listening to the others?”

Getting a bit further down the reflection path, the feeling of a deep connection to underlying principles of a framework applies to each of us - and sometimes this can get in the way of really designing a process so it is as inclusive as possible for the group at hand. I now acknowledge that I’m biased and ignorant about large circles. I still use them now and then with groups who have developed it as their ritual to launch into being together. What I have let go of is my notion of what it looks like when a group is productive - and I have the feeling I am only at the beginning of the journey!