A unique Whatsappinar unearthed 9 projects for the IAF 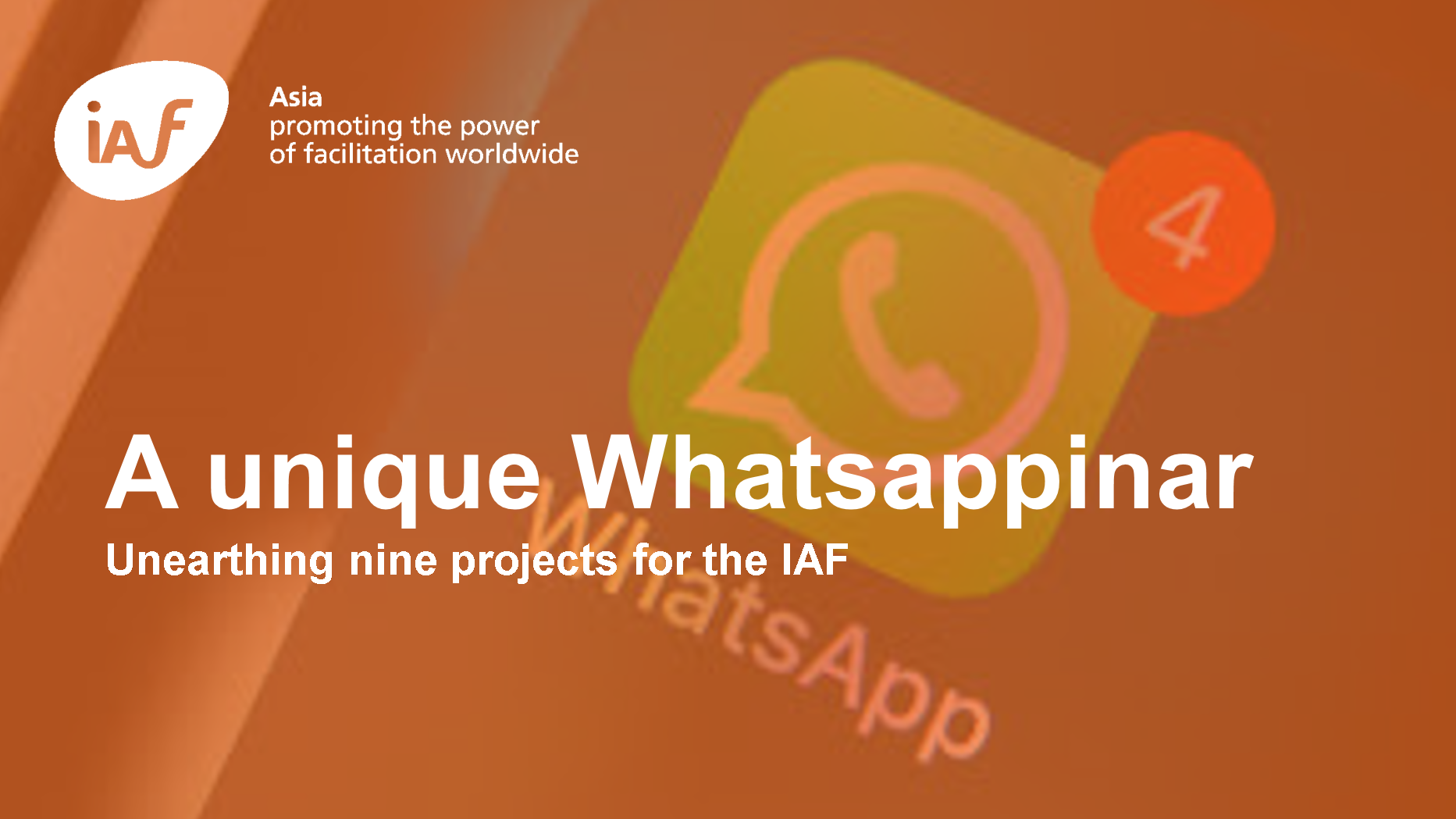 This is a document that showcases a unique attempt to facilitate a session for developing the ‘Mission 2020’ of the IAF India Chapter. Usually, it would have been a face-to-face session or a virtual session but have you ever tried WHATSAPP as an medium to conduct a 90 minute session?  How could we use an impersonal tool like Whatsapp to do a full session?

Here’s how it was planned and executed.

Anchored by Ganesh Dalvi, CPF and based on inputs by Sanjay Dugar, CPF and India Chair, a facilitation event was conducted on the WhatsApp platform. Ganesh was supported by 4 other facilitators.

This 90-minutes session saw 70 IAF India members taking part and share their thoughts over chat and voice messages, to serve as inputs to harvest the group wisdom on projects. The output was shared with the IAF India Core Committee to adopt the projects in line with the IAF India Vision 2025.

This Whatsappinar was  part of the series of sessions offered by CPFs for the India Members, and this one was unique because of a different platform that was being experimented with. The participants were diverse with a mix of members who were new to IAF and ones that were more tenured.

The desired outcome was to generate ideas over 3 specific streams of focus for the IAF India Core Committee Members to deliberate over and take it further as appropriate.

The three streams were:

2. Visibility of IAF in the larger community

These streams were identified earlier in the conversations between the India Chair, the Asia Chair, and the Global Chair.

HOW THIS WHATSAPPINAR WAS EXECUTED?

In the prep stage, the session was engineered using the OPTIC model (Outcome, People, Time, Infrastructure, Cost). To manage the need to use breakout chat groups, it was sensed that support facilitators would be required, and hence 4 of them were sought – 3 needed and 1 backup. A process was created and a document was put together and shared with these support facilitators on critical tasks, their roles and responsibilities. A call to walk them through the plan and clarify any doubts or concerns was done. This call also contributed to discussion on some good rules (ways of working) that were then formed.

A day earlier, some icebreaking activities were initiated. Participants were asked to join a Whatsapp group, and share their introduction by responding to some questions in a preset format. This went on till about an hour before the session and hence had the participants already engaged.

In the execution stage, all facilitators logged in 30 minutes early to check and get everything ready. Tools like ‘mentimeter’, group links, admin rights etc. were tested.

The session started on time, and a ‘virtual Mood-O-Meter’ (in the form of Mentimeter) was run as a check in process. The word cloud that was generated was shared to maintain the momentum. WOWs (Ways of Working) were defined to ensure smooth flow of the session.

The desired outcomes were explained and the three stream themes were also detailed. The participants were then moved to three breakout chat groups with participants choosing which one they would like to go to. They had to stay with the group chosen (it was decided not to let them move between groups as normally offered in OST).

Initially there seemed to be a lot of confusion and chaos, including for the facilitators. Nevertheless, the faith in the principles of facilitation were strong, and soon had groups allocate roles like presenter, leader, timekeeper, scribe etc. within them as they thought most suitable. Eventually, everyone was back to the home group and presented their ideas. The closure was again with the Mentimeter to check the exit mood.

The desired outcome was clearly met, and we had a variety of ideas harvested. Later, when they were grouped led to the IAF India Chapter creating 9 projects that they would take up as a start. The rest would be taken up as and when time would permit. The participants also shared that they were very comfortable all through and that their level of engagement was very high. Many of them expressed how surprised they were to see that a simple chat platform like WhatsApp can be used to facilitate and harvest the group wisdom.

In the debrief after the event the following emerged as success factors of the Whatsappinar:

What could be done better:

It was a great experience to innovate through this Whatsappinar and producing 9 projects for the India Chapter.

We invite any queries / feedback from the global community. Please write to: