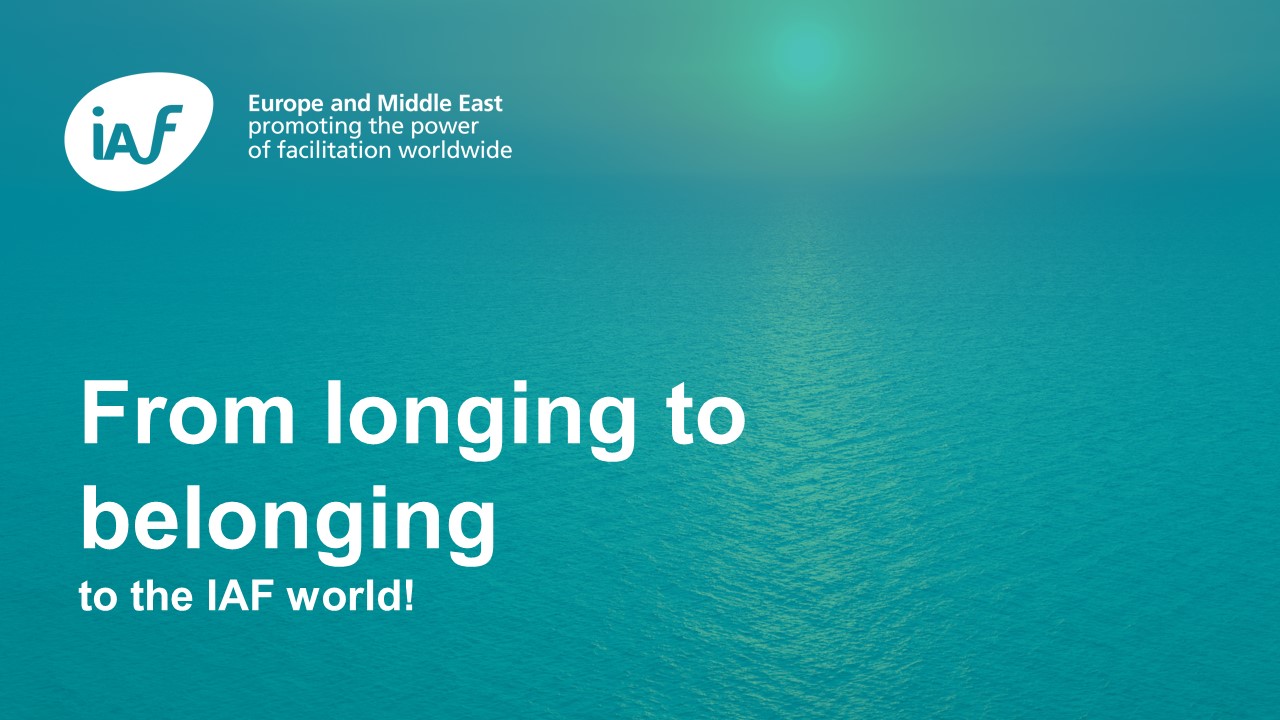 Belonging is on the menu of the Global Flipchart: Diversity, Inclusion and Belonging. At the same time we’re having conversations about membership, also about belonging.

We usually ignore paradoxes. They seem illogical, a matter of faulty definition, sloppy thinking. Or just – a in the case of Escher’ drawings -, funny pictures. Paradoxes however are real. I’ve studied physics, and where you look, there’re paradoxes. We just are made to keep quiet about it, so you won’t become anxious.

The problem with paradoxes, is that they’re not problems we can solve. You couldn’t, even if you tried with both hands . They’re no problems. And they don’t solve themselves either.

We use the word paradoxes when we have apparent contradictions. Is a paradox a contradiction? It appears so. If it only appears so, it isn't real, isn’t it? Apparently.

Member and not-member, doesn’t look like a paradox. Membership and non-membership clearly contradict each other. You cannot be a member and a non-member at the same time. Either you belong or not.

As a member of IAF – or any other club – you do realize a paradox. When we define membership, we’re creating boundaries ourselves. You’re part of your definition and taking part in defining membership. And then you use your definition to identify, classify, distinguish, recognize yourself and others.

We usually ignore these paradoxes. In most concrete situations this works fine. They seem a nuisance or a problem that will be solved. But paradox, they don’t go away. Life is inherently paradoxical. And most certainly for us facilitators.

One of the three groups of four paradoxes Smith and Berg call the paradoxes of Belonging, This group consists of what they call: identity, individuality, involvement and borders. I prefer to use verbs: identifying, individuating, involving and bounding. I’m also pointing at the paradox of binding – a relationship - versus bounding – a limit.

You derive your identities from belonging to groups. Your family, tribe, nation, school, peer groups, … . And yet, a group has no identity of its own. A group without identifiable people we call a “mob”, from “mobile”.

You’re an individual – “you’re all different”, Brian proclaimed – and a group consists of individuals. But as a group can be divided, it cannot be “undivided”. Here we’re having the root of all group dynamics.

You can be involved, even when only “being there” and “doing nothing”. Involving, paradoxically, shows up the most, when you try to dis-engage, dis-solve, dis-entangle, or di-vorce from a group.

And finally, all boundaries have to be semi-permeable. A fixed wall around a group will starve it on the inside, slowly. Without boundaries, there cannot be a group. We continually move in and out.

In order to belong, we draw boundaries, limits, borders, but borders don't define the group. You can see us  struggling in Brexit. This issue is about the identity of the English. As opposed to Scottish, Welsh, .. and "European". But nobody in Europe feels “European”. (I do!)

Therefore, facilitating - making connections ("li"  as in li-ne) - facilitates connecting and "belonging". In facilitating, we should "liberate" participants to freely choose to stay and leave a group. Isabelle Min suggested to use “to deliberate” for to speak, talk or  have a dialogue, as it contains the word “liberate”.

Facilitating a group requires the ability to “stay on the boundary too”. Only there you can “hold the space”. You move in, out and remain on the border. Another way to call this is to behave autonomously.

Now it gets really difficult with an association like IAF, as being part of an association of facilitators requires you to stay “on the boundary” too. I’m always doubting my position.

Facilitators, I am afraid, must have unclear identities (yes, multiples). And we continuously feel  “un-belonging”. We crave to belong and be an “undivided individual”. To deliberate, we must be free to liberate ourselves.

This is why we’re having our unending discussions on “the definition of facilitation”. The argument being, that “facilitator” is unclear for the client. Of course it is! That’s why we call it “facilitator”. If it were clear, they’d call a trainer, consultant, moderator, counselor or even an interim manager. Part and parcel of our job is to define our job.

Ask the client and then the group, what they require from you, the facilitator. Create clean space and time. Use clean language.

When you’re called to facilitate, be sure a situation will clarify itself. Trust the process, trust the group, trust yourself. And afterwards they’ll say: “we have been facilitated”

For me, IAF-world has never been in the business of "serving" members, clients nor markets. It's not about gains, profits or benefits. Nor about using a logo properly. These are just tokens.

We belong to each other, before, during and after membership. We’re programmed to receive. You can check out, but never leave. ‘cause we've got the most lonely profession in the world: we're always the "odd (wo)man out". Don’t even try to get even.