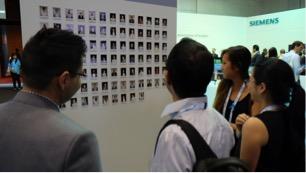 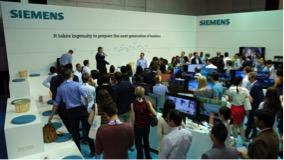 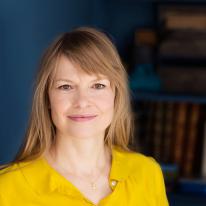 One Young World is a non-profit organization that gathers together young leaders from around the world, empowering them to make lasting connections to create positive change. It stages an annual summit where young talent from global and national companies, NGOs, universities and other forward-thinking organisations are joined by world leaders – some call it the World Economic Forum of the Youth.

Siemens encourages its young talent to contribute to global change and energize their corporate environment by creating change from within. They sent a delegation of 125 aspiring leaders across all sectors and regions of its global organization to take part in the One Young World (OYW) Summit 2015 in Bangkok. There, they met with their fellow delegates for the first time.

The Employer Branding team asked me to facilitate the involvement of OYW alumni and delegates in preparing the summit. Another task was to give input as an expert for participation, interaction and engagement. Siemens wanted to enable their young talent to network, lead meeting formats and interaction and ruled out external facilitation during the summit. An entirely virtual project for me!

We kicked off the involvement of OYW delegates with a group of OYW alumni. In a virtual ideastorm (powered by Stormboard) we collected input for the use of a ‘Siemens branded space’ during the summit.

Soon a metaphor emerged - the space serves as an embassy or lounge, a platform for delegates to be visible as a member of Siemens, a place to represent, host and connect.

We aimed to turn delegates into ambassadors before the summit and get them to fill their role quickly and effortlessly. We used a group on Siemens internal social network (powered by Socialcast) for virtual community-building. As a first step, we invited all members of the delegation to join the group accompanied by a crowdsourcing challenge: What should be the identification sign of the delegation?

Group members could post their ideas, comment and vote. The participatory approach boosted membership and engagement within the group and helped us to confidently produce the winning idea.

Along the way, we learned a lot about previous summits from OYW alumni who joined the conversation and got inspired to refine the one or other idea we had for interactions at the lounge and to crowdsource a one-pager with tips for novice delegates.

Within the framework of preparing the summit, the organizational team set up a series of monthly virtual meetings (powered by MS Outlook’s Add-In Livemeeting) where we could clarify organizational issues, tasks and expectations as well as build up the excitement for the summit. This was our means to highlight and orchestrate communications.

In one of these meetings we introduced the Siemens Lounge and presented ways our delegates could use it. We ended the presentation with an invitation to step forward and volunteer for one of the roles we identified alongside with the design of the Lounge.

We used the group on the Siemens Social Network for outreach and engagement with a post for each volunteer role. Like that it was easy for people to commit and follow interactions in a transparent way. For each role, I compiled a short onboarding document people received in advance. There were brief meetings for each group of volunteers on the day prior to the summit to get to know each other and answer remaining questions.

My contact at Siemens and myself were as well distributed across the globe. I got access to Siemens Internal Social Network and we built a closed virtual group to plan outreach and engagement and to align our postings. 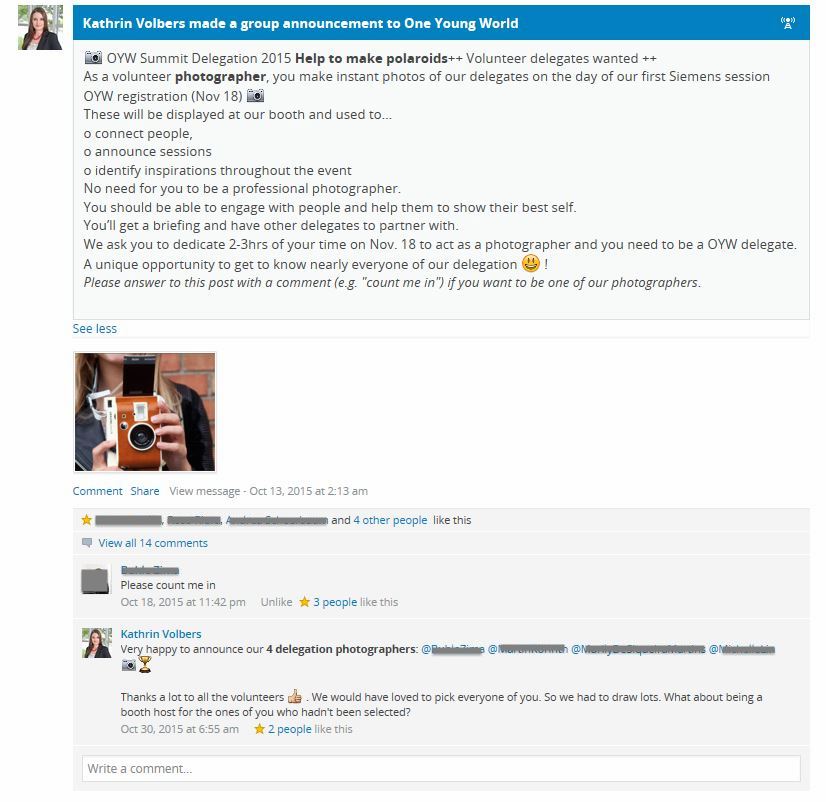 Kathrin, we experimented with various ways to boost participation and engagement prior to the summit – can you share some of your observations?

On Siemens Social Network “easy” stuff worked best: Information in digestible pieces that is easy to like, comment or forward to other people or groups. You have to be aware that people are 100% absorbed by their job. So something like One Young World comes on top and you have to make it both effortless and attractive to engage.

Next time, I would limit our seeding of conversations within the group to one post per week and make effortless interaction my ambition for postings.

What are the advantages of virtual groups as we had on Siemens Social Network?

You have all the conversation on one place and overcome lengthy e-mail conversations. Also, there is more transparency who interacts – and it’s easier to handle one’s own engagement: you don’t have to decide whom to answer. Just comment on a posting or like.

Also, I realized having a picture with each name in advance is a great kick-start when a group first meets in person. This tied in nicely with our polaroid wall at the Lounge.

How about the rather old-fashioned, not very interactive online meetings we had – do we need them?

They helped us to build instances when the whole group comes together at the same time. People perceive them as the means to get an overview and learn what is really important. So I would say, used to orient everybody, they are indispensable to structure and highlight pieces of information in the constant content flow on internal social media.

One of the things we aspired to was to have our delegates share on social media. Would you say we succeeded in that?

There were so many ways to share OYW! There was an app built for the summit, dozens of Facebook groups, our internal social network as well as individual accounts on Twitter, Instagram etcetera. Also, there was so much to see and the program was going on in a constant flow without breaks. I am glad we did not try to further facilitate social sharing of our delegates - I remember that you wanted to create the role ‘citizen journalist’.

We set a tone and modeled communications and exchange that serves that group. We have to trust the group to work with this as an input and I think we succeeded and got just the right balance.

What difference did the virtual interaction do to the collaboration of the group?

It helped to create the “spirit” of the delegation. I think the tone of voice you set in communications helped us to have delegates to really take over and make it their summit. Being transparent and participatory and - with social media - using means our young professionals are used to also made a difference.

Next time, I would even more trust the group and the process even more – we wouldn’t have needed to organize volunteers as lounge hosts as everybody felt responsible to present our company and show visitors around.