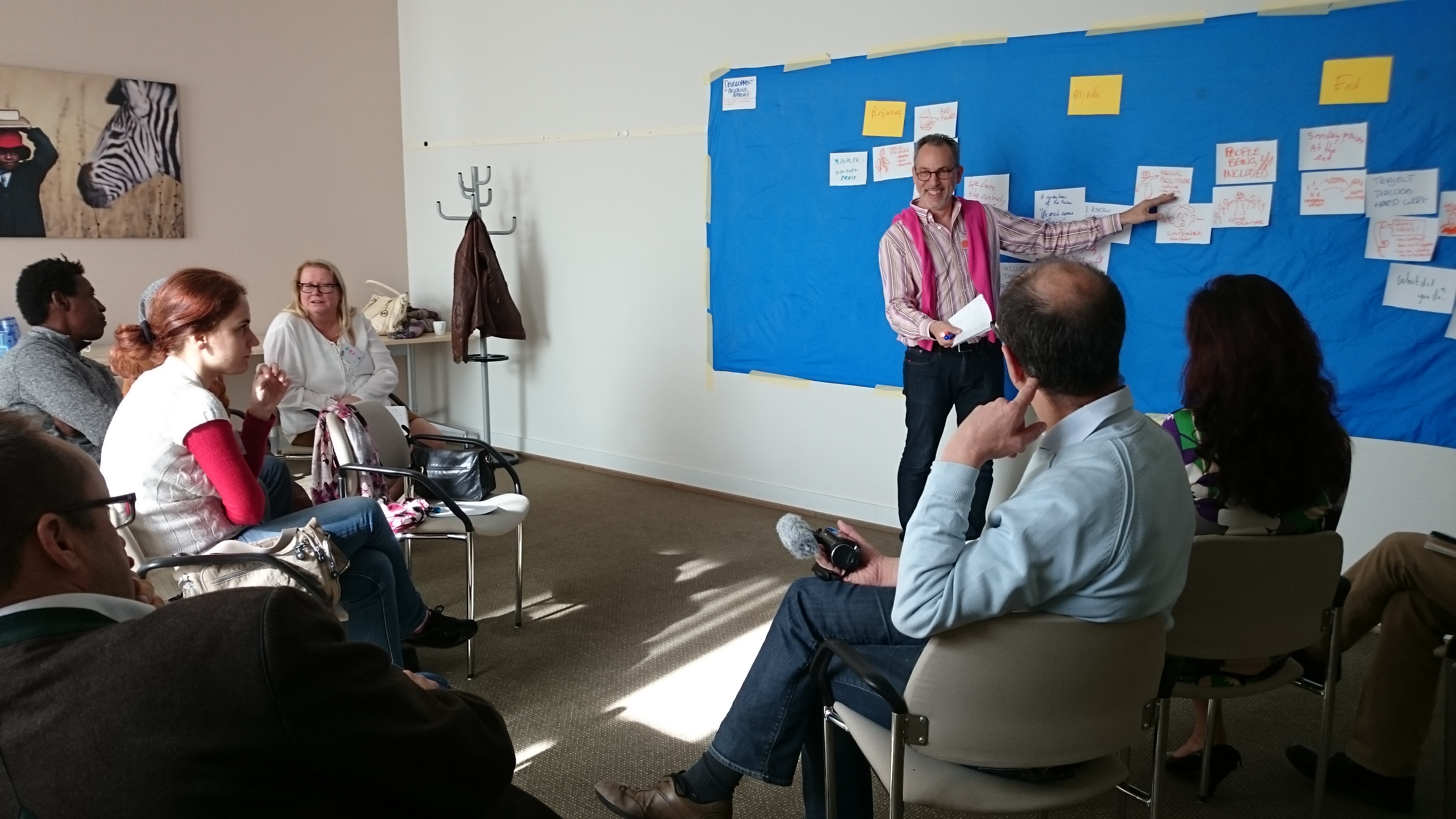 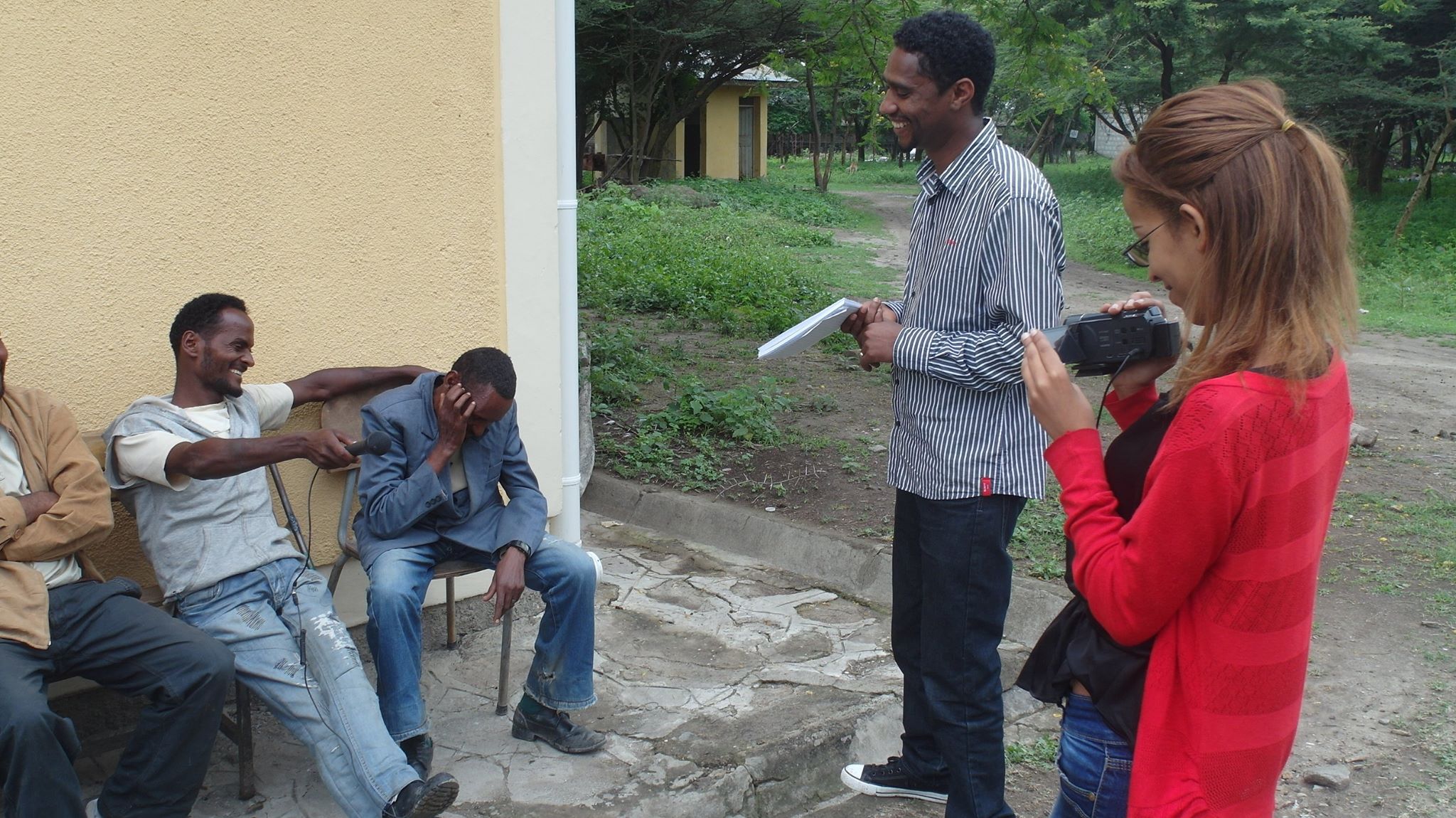 By Simon Koolwijk, facilitator and expert in participatory video

“Seeing our group of HIV/Aids-infected people for 5 minutes – as long as our mayor ‒– on video, gave us the feeling that we are recognized and seen in our community.” A women’s leader in a community in Ethiopia expressed this feeling at a community dialogue, where self-developed video stories were shared amongst stakeholders in Ethiopia, when they discussed about the changes, that had taken place in the health sector. “Seeing ourselves on video, shows how our behavior and attitude has changed in a positive way on how we deal with challenges in the health sector. It strengthens our commitment to continue this process of dialogue amongst the service providers and service users.”

This story is an example on how video storytelling can make a difference in participatory processes. Video storytelling is a method, where people who have a common topic of interest, work together to develop a film. The participants are the directors of the film. The purpose is to help improve the communication amongst stakeholders, where connections and visibility make the difference in the dialogue. The process of filmmaking is as important as producing the final film itself. The presence of the video camera enables participants to talk to people, which they would not meet if they would not make a movie. The method initiates bridge building for key stakeholders at the border of the system. For example, video storytelling enabled youngsters in a Moldovan rural community to have a meeting with the mayor, so that they could make him aware on the presence of their youth club. It was the first step to get youth issues on the agenda of the municipality.

Storytelling and the role of the facilitator

People love to tell and share stories. To transfer this into a film helps them to build and develop their creativity, social capacities to relate and to connect. It is fun to do! The film gives the group a platform to expose their stories to a wider audience and it is an effective tool to build people’s exposure and confidence. The role of the facilitator is to enable participants to get a deeper understanding about the issues, they would like to address to a broader audience. In my career I have been most involved in projects that were related to social development such as health care, education, economic development, water & sanitation and youth development. The presence of a self-made film by the group made a significant difference in the dialogue.

The process starts by composing the group, that will make the film. Their first step is to share stories, followed by questions they would like to explore further and discuss with wider audiences. A good video story has clear goals and a well-elaborated script. Through simple exercises the participants learn some basic camera techniques, how to optimize sound, light and shoot the best frames. The facilitator plays a coaching role during these exercises, enabling participants to give each other feedback. In the second stage the participants capture the video images, with which they would like to tell their story. This can be done by interviewing a number of stakeholders or through role play or acting, as they do in real movies. The facilitator helps the group with editing the video, collecting feedback on the first draft and finalizing the video. Eventually the group presents the video to key stakeholders for discussion aiming to deepen understanding and catalyze change.

While the entire process normally takes 3-5 days, we tried to shoot the film in 3 hours with a group of 10 participants at the IAF EMENA Conference 2016. During the stage of exchanging stories, we realised the importance of the transformational role of the client in the facilitative process. An initial group of 4 people started to write a script about ‘the development of a facilitative approach that helped the client to transform’. ‘The process of developing the story jointly and doing the acting and shooting together was fun!’ , expressed one of the participants. ‘Within a short time we became like an united group’. The next day, at the final plenary of the conference, the film was screened to the whole group. The film triggered a lot of laughter and recognition. ‘This story shows the essence on how change can take place with our clients through the participatory approach’, expressed one of the participants. Another, ‘The boss in this film made me remind of my former boss. It felt as real’. ‘It is amazing to see, that it is possible to create a visible story that shows the transformation. It is not always easy to explain the change a client can expect, when we start with a facilitation intervention with an organisation’, said another participant. ‘I would love this video to show to potential clients’. Watch the full film below.

Development of a facilitative approach

Video storytelling is an empowering tool for learning and having dialogue on issues, where bridge building and visualization can make all the difference.  Video storytelling captures life stories of people, it is fun and supports the capacity development and learning process of stakeholders and it is an excellent means to disseminate life stories to other platforms for communication purposes. It will be up to the group to decide if they like to show their story as a non-fictional or fictional story, having a clear purpose for further discussion.  A video story intervention provides a new and different perspective in facilitating dialogue!