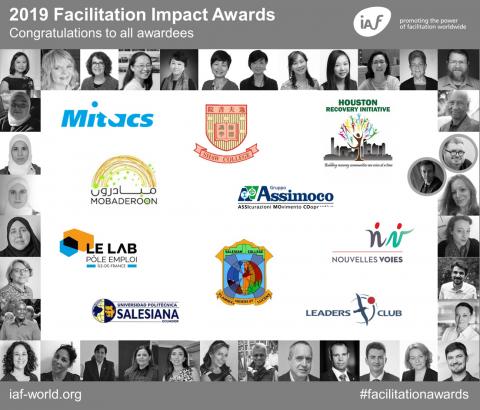 The Facilitation Impact Awards are the world’s most prestigious international awards honouring excellence in facilitation and its positive, measurable impact on organisations everywhere.

The awards were announced by Mr Trevor Durnford, Chair of the International Association of Facilitators, the world’s premier association of professional facilitators with members in more than 65 countries.

“The remarkably diverse range of projects receiving awards demonstrates our belief that good group process facilitation can be used in any context to change the way people think and act, and ultimately support them to positively change the world around them,” shared Mr. Durnford.

“We are very pleased to see that the locations receiving awards is continuing to grow with organisations in Russia and Syria receiving awards for the first time since the awards began in 2013.

“Two of the recipients are a large business, two are small to medium-sized businesses, four are government and nine are not-for-profit organisations. The projects undertaken clearly show that good group process facilitation translates into cost-effective and creative outcomes. The diversity of projects emphasises that expert facilitation can play a major role in any type of project in any sector.”

A summary of the awards and information about recipients is available on our website.

“The facilitators who have gained recognition for their expertise have combined innovative planning with expert delivery in widely-varied fields to help their clients meet complex challenges and achieve organisational objectives,” Mr. Dunford said.

The awards flow from a peer evaluation of submissions by association volunteers who award points based on a set of objective criteria capable of being applied to any project. The results for successful nominees are reflected in awards at the Platinum, Gold or Silver levels. The awards are international recognition for the achievements of both organisations and facilitators and we encourage their proud display.